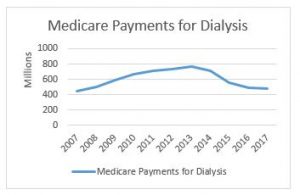 The payment reduction is partially the result of the reduction in the amounts paid for dialysis services. However, it is also reflective of an overall decline in the number of approved dialysis transports. For this, we can look primarily to the impact of a four-year demonstration project that requires prior authorization of dialysis transports in 8 states and the District of Columbia.

As a reminder, the original prior authorization states were selected based on higher-than-average utilization rates and high rates of improper payment for these services. In particular, the Medicare Payment Advisory Commission (MedPAC) had singled out these states as having higher-than-average utilization of dialysis transports in a June 2013 report to Congress. The chart below shows total spending on dialysis in those states in the years immediately preceding the implementation of the prior authorization project up through 2017, the third year of the demonstration project. While the three states had very different trajectories prior to 2015, each showed a significant decrease in total payments for dialysis under the demonstration project. 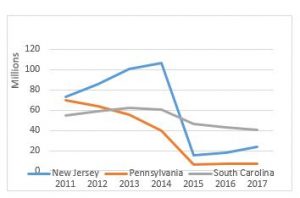 Three years into the prior authorization program, it is starting to become clear that the two MACs have approached the problem of overutilization of dialysis transports using two different approaches. Palmetto appears to have adopted a slow-and-steady approach, with total payments declining in a consistent manner year after year. By contrast, Novitas adopted more of a “shock the system” approach, where it rejected nearly all dialysis transports in the first year, and has adopted a somewhat more lenient approach in subsequent years.

Last year, I wrote that two years of data under the prior authorization program permitted two conclusions: (1) the implementation of a prior authorization process in a state will undoubtedly result in an overall decrease in the total payments for dialysis within that state and (2) the size of that reduction appears to be highly dependent on the Medicare contractor.

With an additional year of data, I think both conclusions remain valid, although I would revise the second to suggest that the initial reduction has more to do with the Medicare contractor. The evidence from the third year of the program suggests that the trends tend to equalize after the first few years. It is also possible that Novitas felt a more aggressive approach was needed in the first few years to address evidence of widespread dialysis overutilization in the Philadelphia metropolitan area.

This has potential implications beyond the demonstration project, as CMS looks towards a possible national expansion of the program. Among other issues, it suggests that the AAA must continue its efforts to work with CMS and its contractors on developing more uniform standards for coverage of this patient population.

What the AAA is Doing

The AAA continues to work on legislation that would restructure this cut to dialysis transport reimbursement. The AAA strongly supports the NEATSA Act (H.R.6269) introduced by Congressman LaHood (R-IL) and Congresswoman Sewell (D-AL) that would restructure the offset so that a majority of the additional reduction would be focused on those ambulance service agencies in which 50% or more of their volume are repetitive BLS nonemergency transports. AAA members and the AAA are working to get a Senate companion bill introduced shortly. The goal of this legislation would be to have the restructured offset go into effect as soon as possible. Thank you to the dozens of AAA members who have already contacted their members of Congress voicing their support for this critical legislation.

Have an issue you would like to see discussed in a future Talking Medicare blog? Please write to me at bwerfel@aol.com