Written by american-ambulance-association on February 2, 2020. Posted in 40 Under 40. 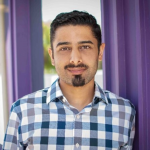 Hasieb Lemar has been with Royal Ambulance for over 13 years. Hasieb’s experience includes time as a Field EMT, after which he was promoted to Field Training Officer, Operations Supervisor, Director of Operations, Vice President of Operations, and to his current role of Chief Operating Officer. Having risen through the ranks at Royal Ambulance, and being an integral part of the organization’s growth and development, Hasieb has played a critical role in shaping and developing future healthcare leaders with an emphasis on compassionate patient care. Versatile, innovative, and service oriented, Hasieb has a proven track record of successfully driving operational efficiency while maximizing business opportunities and revenue growth. Hasieb earned his degree in Criminal Justice from Cal State Hayward located in Hayward, CA where he grew up and still resides with his wife and daughter.
____

Hasieb Lemar has risen through the ranks at Royal Ambulance, starting as an EMT in 2007, to becoming the first Chief Operating Officer at Royal Ambulance at the young age of 33 in 2019. Hasieb’s impact can’t be understated or expressed in a few short paragraphs. Driven by being a servant leader, he works tirelessly to mentor our growing team of managers and supervisors, cascading his impact to hundreds of young EMTs who serve the Bay Area communities and who have developed to become Nurses, Physicians Assistants, Firefighters, and Doctors.
Hasieb’s legendary work ethic embodies Royal’s organizational core values of being Adaptable, Driven, Engaging, and Empathetic. Hasieb has led Royal’s progressive growth from just a few ambulances running a dozen transports a day to one of California’s premier mobile health care providers, transporting over 65,000 patients a year and earning multiple recognitions as one of INC Magazine’s fastest-growing companies in the United States.

Among many awards, the one most reflective of Hasieb’s leadership is the designation of Royal Ambulance as Best Company to Work For in the US by Modern Healthcare. Hasieb’s focus on employee engagement and career development alongside process improvements and patient experience have produced superior operational, financial, and clinical results.

Hasieb spearheaded the development of Royal’s partnership with the Organ Donor Network West & San Ramon Medical Center in creating the Donor Recovery Intra-Facility Transport (DRIFT) Program. Building the program from the ground up, the team has been able to improve access to donors across Northern California and most importantly reduced precious time to provide life-saving transplants to hundreds of patients. While working with the Organ Donor Network, Hasieb presented at the University of Wisconsin to help launch a pilot program. Since Royal’s own program-launch three years ago, Royal has traveled over 67,000 miles serving the Organ Donor Network. Due to Hasieb’s efforts, countless patients have been given a new chance at a new life.

When Hasieb is not working, he is a dedicated father and husband, who finds time to serve on various committees in his home city of Hayward, including the Keep Hayward Green Task Force. Hasieb also volunteers his time on the Data and Operations Committee for the California Ambulance Association.

Royal Ambulance and the community we serve would not be the same without Haiseb’s leadership. A trusted advisor, mentor, coach, and friend; everyone and anyone who meets Hasieb and has the privilege to work alongside him, feel supported, encouraged and know he has their back no matter what.