Written by American Ambulance Association on February 2, 2020. Posted in 40 Under 40. 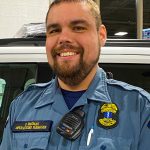 David Basnak started his emergency services career when he was sixteen years old at his local fire department in Jamestown, Pennsylvania. While a Senior in high school, David attended a locally hosted EMT class. After graduating from high school, David worked locally in Greenville, Pennsylvania as an EMT and attended Penn State University (PSU) pursuing a degree in information, science, and technology. As David’s interest in the EMS field continued to grow, he decided to attend a local Paramedic program. For fourteen months, David attended both PSU and the Paramedic program through Butler County Community College, completing both programs. After gaining experience as a Field Paramedic, David worked to continue to pursue his EMS career through various leadership positions. Over his career, David has held the titles of Continuous Quality Improvement Coordinator, Personnel Director, EMS Specialist, Senior Manager of Pre-hospital Care, and most recently Operations Manager. Currently, David oversees all field operations for EmergyCare, one of the largest non-profit EMS organizations in the Commonwealth of Pennsylvania. EmergyCare, located in Erie, Pennsylvania, provides mobile health care to seven counties in Northwestern Pennsylvania. David holds a master’s degree in Business Administration from American Military University, is a Certified Medical Transport Executive through the Medical Transport Leadership Institute, Board Certified Emergency Manager through The International Association of Emergency Managers, and holds his Flight Paramedic Certification through the International Board of Specialty Certification. David’s current role has him on an Executive leadership track to continue his professional organizational development at EmergyCare.

David Basnak should be recognized as one of the American Ambulance Association’s Forty Under 40 as he has demonstrated excellence and great promise throughout his career in pre-hospital medicine and Emergency Medical Services. David is recognized as a leader throughout Northwestern Pennsylvania and is respected by his colleagues not only in the EMS field but also clinicians in our regional health care facilities.

In his short tenure at EmergyCare, David’s leadership, guidance, and expertise has assisted EmergyCare in recruiting and retaining EMS providers (currently at 95% staffing). David has helped to redesign our new staff orientation and on boarding and he continuously leads by example by regularly jumping on a truck and answering calls with the crews.

David’s constant thirst for learning has made him a great resource for staff and our organization’s leadership. David is always willing to go above and beyond for the mission of EmergyCare. Furthermore, David is a servant leader. David puts the EmergyCare team first, by focusing on the needs of team members, acknowledging their perspectives, and giving them the support they need to be the best they can be. David involves staff in decision making when appropriate and has built a stronger sense of community among the staff.