In a previous life I worked for a hospitality-related association. Within that industry there was something known as the “Gaylord Effect”—when Gaylord Hotels would open a property in a city, all of the other businesses in the area, including other hotel brands, benefitted. High standards, a sterling reputation, and the ultimate in customer service meant Gaylord booked convention and leisure business on a scale few could rival. Everyone from the local cab drivers to the bartenders to the surrounding hotels profited from the huge influx of travelers. Where once feared as the luxury brand that would crush the competition, they were soon seen as a desirable ally. So fast forward a few years, and I have a new life working for the American Ambulance Association (AAA), but I often think about the Gaylord brand and their ability to change a city with their commitment to their customers. If you are wondering what any of this has to do with ambulance services, I’m about to get to that.

On a recent trip to Louisiana to document the tenth anniversary of Hurricane Katrina and the role AAA members had in the recovery, the AAA’s Director of Membership, Amanda Riordan, and I had the opportunity to visit Acadian Ambulance. Armed with a local videographer, a short list of questions, and a crippling doubt in our ability to capture what is arguably the most important private EMS story in recent history, we arrived at Acadian’s Air Med Station in Lafayette, Louisiana. 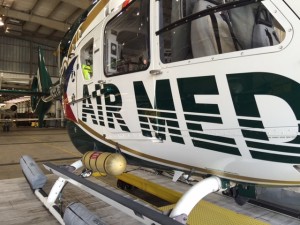 Our first interview was with Marc Creswell, Acadian’s Air Med Operations Manager. Marc’s story is incredible for a number of reasons, and I won’t attempt to retell all of it here, but I will tell you Marc is the kind of guy that could have inspired the phrase, “when the going gets tough, the tough get going.” This is the guy you want in your foxhole. And to be honest, we could have completed our interview with Marc, packed up, and had more than enough material to tell a great story about Acadian and Katrina, but Acadian was just getting started.

We spent the remainder of the day interviewing Dee Dee Sewell, their Critical Support Intervention Specialist; Clay Henry, Acadian’s Vice President of Operations, Communications Center; Blane Comeaux, President of Acadian Total Security; and Chairman and CEO Richard Zuschlag. Everyone, including Mr. Zuschlag, gave us more time then we could have hoped for and held nothing back. They shared a great many operational details, but always through the lens of the story of the people behind all those unseen efforts and rescues.

The next day we visited downtown New Orleans to meet with Steven Kuiper, Regional Vice President for Acadian. Within minutes, I felt like I was hearing the story of Katrina for the first time. Steven shared facts, but, once again, it was wrapped in the story of the people around him—the suffering and the heroism he personally observed on the ground.

And, then came the big finish; Janie Fuller, Paramedic Field Supervisor and lifelong resident of St. Bernard Parish. Janie accompanied us to the Mayor’s Office to interview Deputy Mayor Andy Kopplin and New Orleans Director of EMS Dr. Jeffrey Elder. She then gave us the insiders’ tour of her parish and showed us exactly where the levees were breached. Her entire hometown was under eighteen feet of water in 15 minutes, but by nightfall Janie had commandeered an airboat and was taking a cardiac patient to I-10 and Causeway for evacuation. Needless to say, Janie is a force of nature herself, and no matter what dark alley a call takes her down, this lady is coming out alive and so is her patient.

[quote_right]What also emerged during our visit was Acadian’s ability to tell the human side of what it means to be in EMS. They tell the Katrina story and the story of their company with humility, grace, and a deep appreciation for their colleagues and the many other services that stepped in to lend a hand.[/quote_right]What emerged over the course of those two days of interviews was the amazing story of what Acadian, and private EMS, were able to accomplish in the midst of the hurricane’s devastation. Hospitals were shuttered, law enforcement was overrun, citizens were cut off, and conditions for everyone—including EMS—were unspeakable. Despite this, medics in the area stayed and other ambulance services rolled in.

Hundreds of ambulances with trained medics rolled in to help New Orleans and countless communities throughout Louisiana, Mississippi and Alabama. Whether or not they knew how bad the situation was, they still went in. No one can ever calculate what that response meant to the City of New Orleans and the other affected areas, but I think we all have a sense of how much worse it would have been without the timely response of private EMS. What also emerged during our visit was Acadian’s ability to tell the human side of what it means to be in EMS. They tell the Katrina story and the story of their company with humility, grace, and a deep appreciation for their colleagues and the many other services that stepped in to lend a hand.
So after an incredible 48 hours in Louisiana we had to head home, and I left with a heavy heart. I wanted to stay a little longer. No, I wanted to stay a lot longer. But why? As I sat on the plane home, it hit me. It was the Acadian Effect. Acadian is that big, shining example of what an innovative, self-determined private EMS company can mean to the population they serve. How you can put people first and come out a winner. How when you put people first everyone benefits. Telling the incredible Acadian success story benefits all of EMS because it typifies the EMS culture of going beyond what’s required and how maintaining human dignity is an essential part of patient care.

Our heartfelt thanks to Acadian and every AAA member we have the privilege of serving.

Watch AAA’s Katrina & Rita retrospective video that features many of the subjects of this blog post.