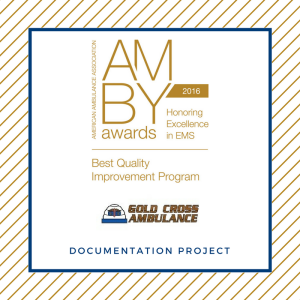 The documentation review process at Gold Cross Ambulance had not changed much since the day of paper trip tickets. Retrospective documentation feedback was being given to crews, but they were not fully utilizing the capabilities of their technology to analyze the feedback and make significant improvements. Gold Cross Ambulance hypothesized that improved documentation goals would lead to better patient care and increased reimbursements. They knew they needed to make improvements in the review process and to better utilize the technology that was already in place. In addition to the documentation goals, they identified the opportunity to work some small, but significant, clinical improvements into a documentation project. One initial focus of clinical improvement was making sure the field crews were obtaining at least two sets of vital signs on every patient, and properly documenting these vital signs in the electronic patient care report (ePCR). Of all the performance indicators we measure, trending of vital signs touches every patient contacted. Educators from Utah EMS for Children shared research citing “inadequate recognition of and response to hypotension and hypoxia was associated with higher odds of disability and death” (Hewes H., 2016). This was such a basic thing to measure, but it had potential to impact every contacted patient. Gold Cross know that vital signs were an area in which they could improve, while also meeting their documentation goals. To do so, they implemented the following:

Gold Cross formed a work group to tackle these issues, which consisted of members of the Quality Department, Training Department, Billing Department, and Operations Department. The group meets every other week to evaluate progress and assess the need for adjustments to the system. Mid-year of 2014, the group worked to revise the program for documentation evaluation. A new standard was created based on the ePCR fields. A point system was established for documentation which gave each ePCR field a weighted number of points, equaling 100%. Incomplete or missing fields result in a loss of points for that field, which provided a way to measure documentation performance. The scoring data is tracked in our ePCR quality module, allowing us to analyze and report on the data easily. The feedback on any areas of missed points is sent to the crew via the ePCR messaging system, so it is easily accessible to the crews during regular daily tasks. Feedback is focused on improvement comments instead of punitive comments. Positive feedback is included in each evaluation. The group released an initial version of the General Instructions for the ePCR, which was an internal manual detailing expectations for every field in our ePCR. The focus was to provide clear expectations to all field crews regarding how to properly fill out the ePCR and what content should be included. The training department created an educational program on the online educational software program, detailing the documentation guidelines and testing the crews on the material. The General Instructions for the ePCR were also posted on the company training site, so crews would have easy access at any time. The Quality Department developed a class for the newly hired providers. The class emphasizes the need for quality documentation, outlines the program, and includes actual documentation examples for evaluation and discussion. Patient advocacy through documentation is instilled in the participants of this class. The Billing Department developed a class which is taught at six months after hire. In the class, documentation is reviewed from class participants. The billing department shows how the bill is processed from the documentation, and they discuss common challenges to the billing process. The program has been monitored with continuous PDSA cycles and has been adjusted as needed for continued improvement.

An initial company goal for documentation was set at 90%. From project start to current date, the company-wide documentation averages have increase from 74% at the beginning of the project to 96% currently. Field crews have expressed greater clarity in the company expectations for documentation. The overall average documentation scores by division are posted regularly for the company to view, and this has had the additional benefit of sparking a competitive streak between some of our divisions, further improving the scores. The improvement in collection of vital signs not only improved overall patient care, but resulted in a Performance Improvement Award from the Utah State Bureau of EMS in 2016. The bureau looked at pediatric vital signs and recognized two rural and two urban EMS agencies in the state for their improvements. Gold Cross Eastern Division won the award for a rural agency, and Gold Cross Salt Lake Division won for the urban agency. Their study found our agency improved the collection of pediatric vital signs by 53% in our urban area and 66% in our rural area.

The most important impact of this project is improvement in patient care, which is our primary mission. The goals for complete documentation have encouraged field crews to make sure they complete proper assessments, since they know those areas of the ePCR are evaluated and must be complete. Improvements in assessment result in better differential diagnoses and improved treatment plans and outcomes. The documentation project has positively impacted Gold Cross financially as expected. Reimbursement rates have increased and the time to complete the collection cycle has improved. Due to the documentation improvements, the billing staff spends less time researching information, following up on incomplete documentation, and fighting in appeals.

Congratulations to Gold Cross Ambulance for the Reduced Readmissions Project’s selection as a 2016 AMBY Winner for Best Community Impact Program.

Amanda Riordan serves as the Vice President of Membership of the American Ambulance Association. She joined AAA as Director of Membership in May of 2015. She has fifteen years of progressive experience in non-profit operations, membership development, marketing, operations, and credentialing.