Each year, the Centers for Medicare and Medicaid Services (CMS) determine the following year’s Ambulance Inflation Factor (AIF), a figure that has deep revenue implications for ambulance services of all sizes. CMS recently announced that the 2016 AIF will be a disappointing – 0.4%.

In this inaugural edition of the Talking Medicare blog, I explore the ins and outs of the AIF, including the impact of the Multi-Factor Productivity Index on our industry’s Medicare payments.

First, some background. The Affordable Care Act revised the formula by which CMS calculates the annual adjustment to Medicare’s reimbursement rates for ambulance services. Prior to 2011, Medicare’s payment for ambulance services increased each year by an amount equal to the percentage increase in the consumer price index for all urban consumers (CPI-U) for the 12-month period ending in June of the previous year (i.e., for 2016, the 12-month period ending on June 30, 2015). Starting in 2011, the CPI-U increase is reduced by the so-called Multi-Factor Productivity Index (MFP).

What to Expect Next Year

Yes, you read that correctly. Your Medicare reimbursement rates will decrease next year!

The MFP represents a permanent reduction in the amounts paid by the Medicare Program for ambulance services. And, unlike other recent reimbursement hits our industry has faced, this reduction compounds itself over time.

What do I mean by that? Quite simply, I mean that the lower rates become part of the baseline against which the next year’s AIF is calculated. As a result, the gap between our industry’s costs of providing ambulance services and Medicare’s reimbursement for those services grows larger every year. 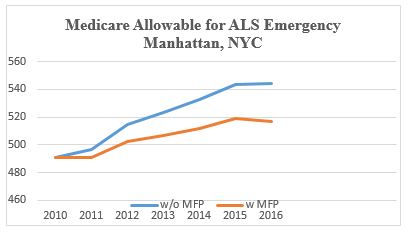 Keep in mind that the AIF was created to ensure that Medicare reimbursement keeps pace with the increased costs of providing ambulance services to your community. By that yardstick, the current process for calculating the Ambulance Inflation Factor is clearly inadequate.

One of the key issues facing our industry is our ongoing fight for permanent Medicare ambulance relief. The recent AIF simply highlights the need for a better method of ensuring that Medicare’s payments keep pace with our costs.

Have an issue you would like to see discussed in a future blog post? Please write to bwerfel@aol.com.

Not yet a member? Join today to gain access to AAA’s reimbursement, human resources, and healthcare law expertise.