Written by Amanda Riordan on January 12, 2021. Posted in Webinars.

Protect Your Brand, Bottom Line and Gain More Visibility into Your Fleet with More Than Just a Map
Free Webinar January 28 at 2:00 ET

Savvy contractors know that GPS fleet management solutions are key for maximizing productivity, efficiency, safety, customer satisfaction, and more. In today’s modern world, they are adding new technology to take those benefits to the next level. Learn how the Lytx Fleet Tracking Map provides immediate fleet activity including geo-fencing, fuel economy, how to calculate stops in a day, and route.

Lexipol is a comprehensive risk management solution for public safety and local government. We use content and technology to create safer communities and empower the individuals and organizations that serve them. 2020 has presented the communities we serve with unprecedented challenges–pandemic, fires, hurricanes, civil unrest and more–and we, as an organization, went into overdrive to provide solutions. These initiatives included our free Corona Virus (COVID-19) Learning & Policy Center, which provides free COVID-19 policies, course and training tools for individuals and organizations. We also hosted a hugely popular and powerful webinar, First Responders, Stress Management and Coronavirus, presented by Mike Taigman. We also featured timely and important coverage across our media properties, including EMS1’s Coronavirus (COVID-19) Special Coverage section. 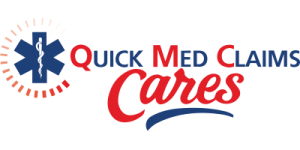 Quick Med Claims (QMC) is proud to be a trusted revenue cycle management partner to the ambulance industry. We provide billing and consulting services to air and ground ambulance providers with the goal of compliantly maximizing reimbursement for every trip.

In the second week of March 2020, QMC transitioned more than 300 team members from seven offices across the country to ‘work-at-home’ status and without service interruptions!

With our team in place, we immediately focused on meeting Pandemic-related operations and communication challenges.

QMC’s Leadership monitored the situation and reported out critical national and state-specific Public Health Emergency alerts to our team members. Our Operations Team halted balance billing for our clients who had accepted CARES Act stimulus funds and identified trips where verified uninsured COVID-positive patients could be submitted to the Uninsured Patient Payment Program for payment.

Our Communications Plan provided real-time guidance to providers through various platforms, including: e-mail bulletins, Live Q&A Webinars, a COVID-19 Resource Center accessible from our website, and a dedicated email address at COVIDHELP@quickmedclaims.com for assistance with any Pandemic-related issues.

“QMC Cares” became our theme as we banded together as one in a concerted effort to assist our clients and their team members with unwavering support for those who sacrifice daily on the front lines of this global emergency.

FERNO is the global leader in pre-hospital emergency care solutions serving emergency services, fire rescue, mortuary, industrial safety, police, and the United States military. We serve more than 100 countries and have partnered with services, caregivers, safety and regulatory agencies, and customers globally to create a new vision for the delivery of emergency care. FERNO is committed to modernizing EMS systems by integrating products that maximize safety for caregivers and patients alike.

To support our customers across the globe during the pandemic, FERNO leveraged long-standing partnerships to help promote safety for front-line healthcare workers. FERNO products such as the Cot Patient Shield, Oxygen & Airway products, ventilator parts, hand sanitizer, face shields and other PPE became more important than ever to front-line EMS. Partnering with VRpatients for online virtual EMS training has also addressed EMS staffing and training needs during COVID.

Other products in the FERNO portfolio such as evacuation stair chairs, stretchers, litters, litter arms and the iNTRAXX system have been heavily used to support hurricane and flooding evacuation efforts.

For more information, visit www.FernoEMS.com or call 877-733-0911 to learn more and help us transform emergency care.

Distance CME | Deer Accidents: What EMS Should Keep in Mind

Written by AAA Staff on December 10, 2020. Posted in Operations.

Deer Accidents: What EMS and Ambulance Providers Should Keep in Mind

Wondering which state has the highest incidence of deer accidents in the U.S.?
West Virginia, followed by Montana and Pennsylvania, according to a State Farm Insurance report. Deer collisions increase from October through December, which includes elk and moose.

Car crashes caused by deer accidents account for up to about 200 fatalities per year and 10,000 injuries, according to West Bend Insurance Divisions.

Written by Don Johnson on September 22, 2016. Posted in Press, Reimbursement. Leave a Comment

Medicaid and Medicare Drive Reimbursements Below Cost of Service

Schaumburg, IL—September 22, 2016—The convergence of the aging baby boomer population, the projected increase of emergency room services for baby boomers, added to lower reimbursement rates for Medicaid and the increasing influence of private insurance companies with Medicare, signals a rough road ahead for ambulance companies.

In a new survey by revenue realization leader, CDO Squared, and the American Ambulance Association, 126 ambulance company executives were asked, “As a rule, the number of emergency department visits is much higher for Medicaid and Medicare recipients than for the uninsured and those with private insurance. How will this effect your profitability over the next five years?”

The survey revealed that well over 70 percent of ambulance companies saw decreased profitability over the next five years. “In an industry already hard hit by the effects of Obama Care, this is just one more pressure point put onto ambulance companies to maintain profitability.” according the William Stuckert, CEO of CDO Squared. The American Ambulance Association also weighed in on the survey results. “Ambulance services continue to struggle to do more in the way of providing high-quality medical care and improving patient outcomes with less financial resources, and from the survey it doesn’t appear it will get better.”  Stated Mike Hall, AAA President.  “On the Medicare payor front, H.R. 745 and S. 377 would make permanent the current temporary add-ons that have allowed ambulance services to maintain critical financial relief.”

Stuckert offered this advice for those struggling with increased pressure on their financials. “Ambulance companies must learn how to balance their payer mix. With the push by many states to move Medicaid patients into Managed Medicaid Programs, ambulance companies must choose a payer mix that provides a reasonable amount of profitability.” Stuckert stressed the importance of using cash flow analytics to take a deeper look at the profitability of an ambulance company’s location. “Once you understand the true value of your facility, you’ll be able to balance your runs for reasonable profitability” said Stuckert.

The American Ambulance Association represents ambulance services across the United States that participate in serving more than 75% of the U.S. population with emergency and non-emergency care and medical transportation. The AAA was formed in response to the need for improvements in medical transportation and emergency medical services. AAA views pre-hospital care not only as a public service, but also as an essential part of the total public health care system.

Written by AAA Staff on August 25, 2016. Posted in News, Reimbursement. Leave a Comment

National Healthcare Receivables Company based in southern California is seeking a highly self motivated sales/marketing representative. Must be able to work independently as well as with a team in following up on and generating accounts.  We need a qualified and experienced Sales/Marketing Representative to assist with growth in the following specialties:

Our sales team is passionate about building relationships with hospitals, physician billing companies, medical centers, and other healthcare related providers. They support business development and are able to establish strong relationships with new and existing referral sources. In short, they are responsible for helping the company’s overall business growth, primarily through the promotion and sales of our services.

Your drive in ensuring the company is achieving high revenue objectives will result in a potential  income of a six figure base salary plus commission, full benefit package to include Medical, Dental, Vision, Life Insurance, plus supplemental benefits.

If you can analyze and identify opportunities, develop strategies and action plans in partnering with healthcare agencies by promoting our services… Then take the challenge and hop on board. Send resumes to dweinberg@cmrefsi.com or mail your resume to:

Written by Don Johnson on August 24, 2016. Posted in Press, Reimbursement. Leave a Comment

Schaumburg, IL—August 30, 2016—To understand the serious affect that the Affordable Care Act (Obama Care) has had on ambulance companies, CDO Squared™, the leader in revenue realization for profit-minded EMS providers, initiated a survey with the American Ambulance Association. The results were staggering when dollarized. One hundred twenty-six ambulance company executives were asked the following question: “Over the past few years, many ambulance companies have been negatively impacted by the increase in Medicare and Medicaid patients now enrolled in managed care plans run by for-profit insurance companies. What effect has this had on your operation in lost revenue since the Affordable Care Act (Obama Care) was enacted?”

The result: Overall the impact totaled $2.1 billion in lost revenue because of reduced margins due to lower fees dictated by the plan. The survey also revealed that those with revenues of $1 to $50 million (82.5% of the participants) had lost revenues between $315,000 to $730,000 with larger operations driving the averages up. According to William Stuckert, President and CEO of CDO Squared, “The results are not surprising when you consider that over 75 percent of Medicare and Medicaid patients now opt for a managed care plan. What it boils down to is that these for-profit insurance companies are driving costs down, in many cases below the actual operating costs of many ambulance companies. It’s a numbers game, as you see the larger companies with more exposure being hit the hardest.” When asked what ambulance companies can do to offset these losses, Mr. Stuckert said “Ambulance companies need to manage their commercial payers and overall costs better, and that means collecting more of the revenue they are entitled to. Since ambulance companies excel at saving lives, many lack the tools to collect revenue they are owed. In fact, on average, ambulance companies collect only 70 percent of the revenue they are due as reimbursements are lost in a sea of EMS data.”

Maria Bianchi, Executive Vice President of American Ambulance Association, echoed much the same sentiment regarding insufficient reimbursements in the industry. “The CDO Squared survey results reinforce what the American Ambulance Association has long known—ambulance services across the country are operating in a climate where reimbursement is often well below the cost of service. AAA volunteers, consultants, partners, and staff are working tirelessly across many channels to bring to ambulance services the reimbursement revenue they need to continue serving the public each and every day.”

The American Ambulance Association represents ambulance services across the United States that participate in serving more than 75% of the U.S. population with emergency and non-emergency care and medical transportation. The AAA was formed in response to the need for improvements in medical transportation and emergency medical services. AAA views pre-hospital care not only as a public service, but also as an essential part of the total public health care system.