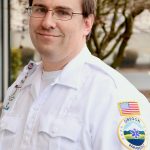 Tom graduated from high school in Roseburg and went to Umpqua Community College while pursuing his associate degree in music. While studying, Tom was selected to participate in the “Umpqua Singers” and had the honor of traveling with them in 2006 while they traveled across county to deliver the “National Christmas Tree” to Washington, DC. During this trip they played approximately eight venues per day over 30 days. Once arriving in DC, Tom performed for Vice President Dick Cheney and numerous members of congress.

After receiving this associate degree, Tom went to work for Roseburg Forest Products work while learning to do all of the different tasks. While there, Tom had the opportunity to do a ride along with a close family friend who was a career firefighter with Douglas County Fire District #2. Tom was so intrigued after the ride along that while working graveyard shift, he went back to college and completed his EMT certification. Tom continued his education and received additional associate degrees in forensic science and paramedicine. After receiving his paramedic license, Tom went to work for DCFD #2.

In June 2016 DCFD #2 and Metro West Ambulance partnered to provide EMS services to some of Douglas County. In June 201,7 Tom was promoted to Shift Supervisor and stood out for his dedication and high moral standards. In November of 2018, Tom was promoted to Clinical Manager and Assistant Operations Manager.

Due to Tom’s work ethic and high standards he was promoted to Operations Manager and currently oversee’s all the different aspects of Umpqua Valley Ambulance.

Umpqua Valley Ambulance is a relatively young, three year old company. Tom is rapidly taking on new responsibilities and his efforts are building a solid foundation for the future of the organization.