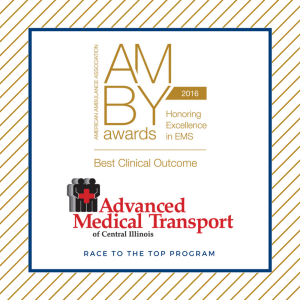 Advanced Medical Transport (AMT) developed the Race to the Top Program to provide the communities they serve with some of the top cardiac resuscitation rates in the nation. “By concentrating on eight highly-interdependent elements of a world-class emergency cardiac care and response system, we soldier more forces together and win more battles in the war on sudden cardiac arrest,” said AMT’s Josh Bradshaw.

Even before implementing Race to the Top, AMT’s cardiac arrest resuscitation rates were three times the national average.  However, the leadership team felt that they could push the rates higher through a multifaceted outreach program. The project began in in late 2014, with eight specific, measurable, and actionable objectives:

AMT began the program with a Return of Spontaneous Circulation rate of 27%, and have now reached 45%, well on the way to their near-60% goal. The national average is just 9%.

In December 2014, AMT became the first downstate Illinois EMS agency to report directly to the Cardiac Arrest Registry to Enhance Survival (CARES), a CDC-approved registry provided by Emory University. CARES participation empowers the AMT team to compare Race to the Top’s results with peer cities in North America. This benchmarking is in and of itself another best practice, and helps to drive ever-better results.

Congratulations to the entire Advanced Medical Transport Team for Race to the Top’s selection as the 2016 AMBY Winner for Best Clinical Outcome.