NorthStar EMS (NEMS) began operations on April 1, 1992 with two ambulances serving Northport, Alabama. The goal was to provide “Excellence in Prehospital Medicine” to our community.” Since that time, NEMS has grown into Alabama’s premier ambulance service operating 80 ambulances and support vehicles with over 400 field, communications and support personnel providing ALS/BLS services throughout central Alabama. Our mission statement is to “Provide personalized and professional care to our communities.” This Mission along with our Core Values center on our patients and customers, thus serving as our compass, ensuring that the business of ambulance service and related care is delivered on a human scale — one person to another, with compassion and respect. Recognized as the first EMS agency in the State of Alabama accredited by both the Commission on the Accreditation of Ambulance Services (CAAS) and the International Academy of Emergency Medical Dispatch as an Accredited Center of Excellence (ACE), NEMS is at the forefront in helping shape the future of EMS in Alabama. 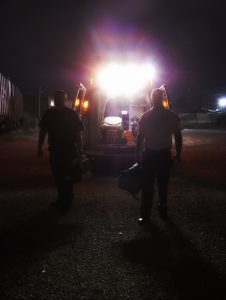 NEMS began 2020 preparing for CAAS re-accreditation when the year quickly devolved into an unprecedented national disaster, not witnessed in modern EMS system design. As COVID began to take root in the US, we were trying to understand how this virus might impact our Team and our ability to serve our communities. As acquiring Personal Protective Equipment became an issue, as suppliers were overwhelmed with orders, so too did incidents of exposure resulting in having to quarantine our providers. Our EMS model shifted from monitoring response-time standards to a more basic model of having units available for the request for service that seemed to grow exponentially. Not unlike disasters of previous years, our providers stepped up to the plate. Working with limited staffing, facing the daily risk of acquiring the virus, one-by-one patients were transported longer distances under more acute circumstances. Paramedics/EMT’s watched as their partners were stricken with Covid-19, some spending time in ICU, others experiencing lengthy hospital stays. Through all of this they continued to meet the needs of their community, responding to and transporting Covid positive patients daily. 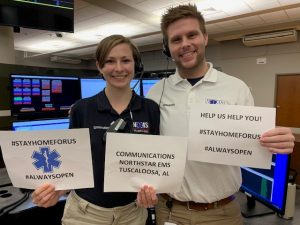 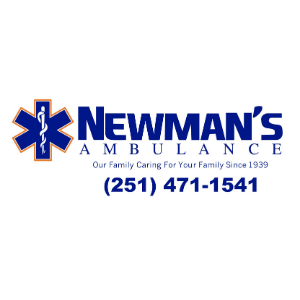 Newman’s Ambulance has been serving the Mobile and surrounding counties in Alabama since 1939. Newman’s Ambulance is the oldest privately owned ambulance company in Alabama and the second oldest privately owned in the United States. We pride ourselves on upholding the highest standard of professionalism and using the most advanced technology. Our goal is to give the best service to our patients while maintaining a deep sense of care for our patients and their families. Our company has a fleet of 20 ambulances. The services we offer to our community are emergent transportation, non-emergent transportation, critical care transportation, wheel chair transportation and event standbys! 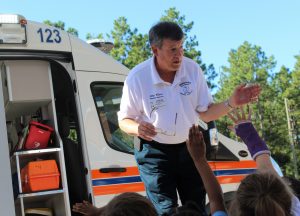 We have experienced our share of challenges through the COVID-19 pandemic. Though we encounter several COVID positive patients daily, we go above and beyond to make sure our crews are well suited for the call. We’re thankful for PPE protection and several other forms of equipment and protection, which has kept our crews safe to continue to serve our community well! 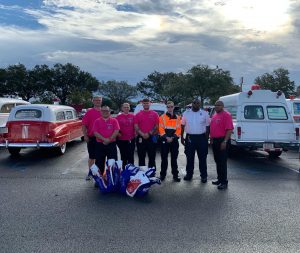 The American Ambulance Association is proud to announce the recipients of the 2019 AMBY Awards. The AMBYs highlight excellence in EMS and the ingenuity and entrepreneurial spirit that epitomize  mobile healthcare. The mission of the awards is to showcase creativity and innovation in the ambulance industry by fostering a culture of collaboration, cooperation, and a passion for excellence in patient care. This year’s awards will be presented at the Annual Conference & Trade Show Awards Reception on November 5 in Nashville. Please join us in congratulating our 2019 winners!

Once again, join us in celebrating the 2019 winners! Learn more about the AMBYs.

Man Saved By An EMT Becomes One

The American Ambulance Association is proud to announce the recipients of the 2018 AMBY Awards. The AMBYs highlight excellence in EMS and the ingenuity and entrepreneurial spirit that epitomize AAA members. The mission of the awards is to showcase creativity and innovation in the ambulance industry by fostering a culture of collaboration, cooperation and a passion for excellence in patient care. This year’s awards will be presented at the Annual Conference & Trade Show Awards Reception on September 7, 2018. Please join us in congratulating our 2018 winners!

Once again, join us in celebrating the 2018 winners! Learn more about the AMBYs.

Washington, DC– McLean, VA — The American Ambulance Association (AAA) has named NorthStar EMS, Inc. a recipient of the 2017 AMBY Award in the Community Impact Program category. Each year, the AMBYs highlight excellence in EMS and the ingenuity and entrepreneurial spirit that epitomize AAA members.

NorthStar EMS is being recognized with an AMBY Award for the community impact program they developed to spread awareness through a monthly EMS segment with a local television station. The topics covered each month had the goal of providing education on injury and illness prevention. These segments reached 55,000 people each month according to Nielsen ratings, and strengthened NorthStar’s connection with the community they serve.

Representatives from NorthStar EMS, Inc. will receive their AMBY at the AAA Awards Reception during the 2017 Annual Conference & Tradeshow in Las Vegas.

The mission of the AMBY Awards is to showcase creativity and innovation in the ambulance industry by fostering a culture of collaboration, cooperation and a passion for excellence in patient care. For additional information about the AMBY Awards or how to submit a nomination for next year, visit https://ambulance.org/amby-awards/

About the American Ambulance Association
Founded in 1979, the AAA represents hundreds of ambulance services across the United States that participate in emergency and non-emergency care and medical transportation. The Association serves as a voice and clearinghouse for ambulance services, and views pre-hospital care not only as a public service, but also as an essential part of the total public health care system.

AAA Mission Statement
The mission of the American Ambulance Association is to promote health care policies that ensure excellence in the ambulance services industry and provide research, education, and communications programs to enable its members to effectively address the needs of the communities they serve.

The American Ambulance Association is proud to announce the recipients of the 2017 AMBY Awards. The AMBYs highlight excellence in EMS and the ingenuity and entrepreneurial spirit that epitomize AAA members. The mission of the awards is to showcase creativity and innovation in the ambulance industry by fostering a culture of collaboration, cooperation and a passion for excellence in patient care. This year’s awards will be presented at the Annual Conference & Trade Show Awards Reception on Tuesday, November 14, 2017. Please join us in congratulating our 2017 winners!

Learn more about the AMBYs.

REPLICA, the Recognition of EMS Personnel Licensure Interstate Compact,  recognizes the day-to-day movement of EMS personnel across state lines. It extends the privilege to practice under authorized circumstances to EMS personnel based on their home state license, as well as allows for the rapid exchange of licensure history between Compact member states..

Learn more about how REPLICA participation can help your state at http://www.emsreplica.org.

Every year, CMS releases data on aggregate Medicare payments for the preceding year. This file is referred to as the Physician/Supplier Procedure Master File (PSP Master File). This past month, CMS released the 2016 PSP Master File, which contains information on all Part B and DME claims processed through the Medicare Common Working File with 2015 dates of service.

In September’s blog post, I discussed the results of the first year of the prior authorization demonstration project for repetitive, scheduled non-emergency ground ambulance transports. During this first year, the project was limited to three states: New Jersey, Pennsylvania, and South Carolina. The data confirms that these three states saw a dramatic reduction in Medicare’s approved payments for dialysis transports.

This month, I will be discussing the national payment trends for non-emergency ground ambulance transports, and, in particular, Basic Life Support non-emergencies.

In actual terms, this means Medicare Administrative Contractors (MACs) approved nearly 1 million fewer BLS non-emergency transports in 2015 (5.86 million) than they approved in 2014 (6.81 million). Roughly 75% of this reduction can be directly attributed to the prior authorization program in the three states listed above. Note: the reduction in approved dialysis transports in New Jersey accounts for nearly half of the national decline). However, that leaves nearly 250,000 fewer approved transports in the remaining 47 states. This reduction was not the result of fewer claims being submitted in 2015; the number of submitted claims was actually higher in 2015 than 2014. Rather, the data shows that this reduction is the result of the MACs actively denying many more claims than in year’s past.

I believe these reductions are the direct result of a step-up in the enforcement activities of the MACs, which I also believe has the tacit, if not outright, approval of CMS.

To test this thesis, I looked at the state-by-state data to see if any trends could be found. What I found was that 28 states saw increases in the total number of approved BLS non-emergency transports in 2015, with 19 states seeing decreases. However, on its face, that number is somewhat deceiving. The states that saw increases tended: (1) to see either relatively small increases or (2) had relatively low utilization rates to begin with. The states that saw decreases tended to be larger states with higher utilization rates, and those decreases tended to be larger in percentage terms. For instance, California saw a 21.5% decrease in the number of approved BLS non-emergency transports. Ohio saw an 11.7% decrease.

These relative changes in dialysis were also highly correlated with the MAC that administers Medicare claims in that state. To the extent your state saw a reduction in dialysis payments, it is highly likely that neighboring states administered by the same MAC saw similar reductions in payments. The following charts will help illustrate this point: 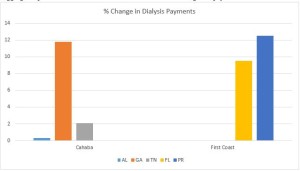 By contrast, every state in National Government Services’ (NGS’) jurisdiction with more than 1,000 paid dialysis transports in 2015 saw a net reduction in the total payments for dialysis. These reductions ranged from a relatively minor reduction of 1.17% in New York to a nearly two-thirds (64.58%) reduction in Minnesota. 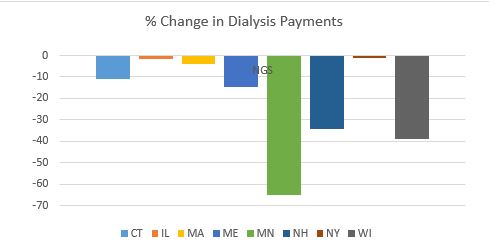 This trend was present in all remaining jurisdictions, although the results were more mixed. For example, with the exception of South Carolina, the three remaining states administered by Palmetto all saw increases. Likewise, the majority of states administered by WPS saw decreases. This included Indiana, which has a sizeable dialysis population. Among WPS states, only Missouri saw a small (3.90%) increase.

California saw a 31.76% decrease in its payments for dialysis. The only other Noridian states with more than 1,000 paid dialysis trips were Hawaii and Washington, which both saw increases.

All in all, the data suggests that CMS and its contractors continue to pay close attention to the non-emergency side of our business, particularly BLS non-emergency transports. These transports have been under scrutiny for many years, as reports from the Office of Inspector General, the Government Accountability Office and other federal agencies have flagged this portion of our industry as being particularly prone to overutilization (and, in some cases, outright fraud).  However, this heightened scrutiny is not being uniformly applied across-the-board. The data suggests that certain MACs have been far more aggressive in targeting these sorts of trips across their entire jurisdictions, while others seem content to target specific (typically large) states within their jurisdictions. This could serve as a template for how MACs will approach prior authorization in their jurisdictions.