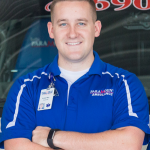 Andy was 10 years old when his mom and dad started a family-owned and operated ambulance company, Paramount Ambulance in 2003. Andy would go to the station with his dad, Marvin where the crews and ambulances were housed when he wasn’t in school. Andy was always an observant kid and could see the unity and team mentality that the EMS providers had with each other when working on tasks around the station. When 17-year-old Andy was in high school, he was with his dad driving around town running errands on July 4th, 2010. At around 11:30 am a call came in from Jackson County Dispatch to send all the ambulances that Paramount could to Bellevue for a mass casualty incident involving a horse and buggy running over spectators at the town’s Independence Day parade. Andy responded to this call with his dad in his command vehicle and when they arrived, he observed organized chaos in action. Andy saw the coordination of EMS First Responders using all of the tools and resources available to treat and move injured patients to the ambulances waiting to transport them to multiple hospitals within the region. It was that day when Andy found his life’s purpose, a career in EMS.

Since that day, Andy has accomplished more than most will in a lifetime. Andy completed his EMT course and obtained liscensure while he was still in high school. Andy then strategically went to Loras College in Dubuque, IA to study business management and finance as this would later help him excel in EMS administration. Andy graduated early in 2014, from Loras College receiving his Bachelor Degree in less than four years. Andy then studied Paramedicine at Northeast Iowa Community College (NICC) starting in 2015. Andy displayed exceptional leadership skills and was voted by the class to be the Class President of the Paramedic Class of 2016.

It wasn’t long after obtaining his Paramedic certification and licensure when Andy started getting involved in local EMS associations and volunteer work. After graduation, Andy was asked to return to the Paramedic Class at NICC to fill a role as an Adjunct Instructor. Andy regularly attended Dubuque County EMS Meetings and began seeking out mentors to help him become more versatile as an EMS Leader. It only took about one year before Andy was promoted to the Director of Operations position at Paramount Ambulance now leading EMT’s and Paramedics he used to look up to as a kid.

In 2017, Andy was asked to be part of the Pafford Medical Service’s Special Response Team for a mission to assist U.S. Virgin Island EMS on the island of St. Croix after two category five hurricanes devastated the island. This was one of the most humbling experiences Andy has had early in his career.

It wasn’t long after his return from this experience when Andy started getting nominated and voted into leadership roles with local and state associations and organizations. In short, Andy is a volunteer Paramedic for his local Fire/EMS agency Centralia-Peosta Volunteer Fire Department, an organization leader, and Critical Care Paramedic at his family’s Paramount Ambulance, the Treasurer and Executive Board Member of The Iowa EMS Association, the Vice President of the Dubuque County EMS Association, a Paramedic for the traveling Alpinestars Mobile Medical Unit to professional sports events, and a Regional Board Member for the local American Red Cross. Andy has also been a vital component of Loras College’s new Master of Athletic Training program and volunteers his off time teaching pre-hospital care to these students. Not a bad resume for an individual who has three years before he turns 30. There is no limit to what Andy can accomplish in the future.

Driven in equal measure by service efficiency and quality, Andy Ney has made it his mission to lead his agency, Paramount Ambulance, into a new frontier of mobile healthcare services. For Andy, EMS is not simply a job but a career. Andy has been proactive in identifying and executing best-practice standards throughout his organization while at the same time offering a family-oriented environment for his team; which has made him beloved by all who know and work with him.

Andy is currently studying flight medicine while at the same time managing and directing all aspects of Paramount’s day-to-day operations. After dedicating his time to post-disaster medical work in the United States Virgin Islands, Andy organized Paramount’s first dedicated Disaster Operations Team which deploys to man-made and natural disasters throughout the country.

Andy is continuously engaged in local, regional, and national programs with the goal of advancing the EMS profession into the future.

The drive, ambition, and all-around professionalism demonstrated by Andy has no comparison. However, these are not the reasons we nominate Andy today; he’s nominated for his passion, enthusiasm, his love for the job, and his tireless efforts to instill these traits in those around him.