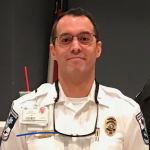 Alan Brook has been a Paramedic in the Southeastern North Carolina region for 13 years. Alan currently serves as a Field Training Officer for New Hanover Regional Medical Center’s EMS division, which has recently ranked as the best EMS services in the nation by EMS World. When Alan isn’t providing patient care, he can frequently be found at the local community college, where he serves as a part time instructor for the paramedic program. In his free time, Alan enjoys an active lifestyle and often competes in half marathons, scuba diving, and Olympic weight lifting.

Alan developed a passion for “taking care of his own” after a coworker committed suicide. In 2014, Alan focused on the well-being of his peers, and went to training for Critical Incident Stress Management. Alan has since taken part in (and coordinated) numerous multi-agency debriefings. Alan is one of only a few “go to” staff members who are specially trained for this situation. In 2016, Alan trained his dog as a therapy dog, and is in the process of training a second dog this year. Alan is developing a program that will utilize these dogs in the near future as another tool to help improve first responder mental health.