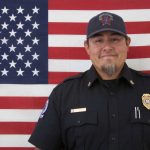 Robert Weisbaum is the EMS & Fire Chief for the Crested Butte Fire Protection District (CBFPD). Robert began his career as an EMT in the suburbs of Detroit, MI and quickly earned his Paramedic as he found a passion for providing patient care. Robert quickly realized that being a Paramedic wasn’t just a job, it was a way of life and the opportunities to make a difference were endless. In addition to wanting to excel in his field, Robert dedicated himself to providing the best possible care to his patients. Robert has also helped with the professional development of countless other providers, serving as a mentor. Robert has always been known to go above and beyond the call of duty. Robert has organized fundraisers for patients and fellow colleagues when he noticed they were struggling. Robert has truly learned what it means to care and show compassion, empathy, and sympathy. Robert once was in a skydiving accident where he was severely injured. Through the care that was provided to him by the EMS team, Flight Paramedics, Nurses, and Doctors, Robert made a full recovery and witnessed how important it is to receive compassionate care. Robert strives to be an understanding leader and provide opportunities for his team to excel. Robert has shown a commitment to excellence and does not settle for anything less. Robert’s most recent endeavor has been as of Chief for CBFPD where he successfully combined a volunteer Fire and EMS department with two separate divisions into a combination paid Fire and EMS department where the standards are set high and excellence is expected.

Over the years, Robert has inspired countless people to pursue a career in Emergency Medical Services. Robert works closely with the local Explorer Scout program where he helps mentor young people in the community interested learning more about their local EMS provider. Robert dedicates his time to allowing shadowing opportunities under his supervision along with after school trainings where he teaches basic skills of EMS healthcare. Robert consistently leads by example and demonstrates the skills that all EMS providers should embody. Robert is determined to keep learning within his field and has proven to be an extremely knowledgeable provider when dealing with critical scenes and complex patient care procedures. Despite being the youngest Chief, our department has ever had, Robert has always been a well-respected by his volunteers and staff. Robert has been instrumental in ensuring optimal community safety by adding a 24/7 full time crews to our department all the while still preserving the volunteer squad. Rob has effectively reinforced our emergency response system while maintaining a healthy relationship with the CBFPD volunteers who still have a desire to help the community outside of their other careers. Robert is constantly looking to improve the organization through the introduction of new equipment and recently won a grant which provided a state-of-the-art ambulance for our district. Robert has rapidly improved our response times by providing living quarters within our stations and by improving the cohesion and camaraderie among our department members. Robert fosters an environment of learning and never hesitates to give his team new training opportunities. Robert demands excellence from his staff and leads by example. Robert’s passion for his team, organization, community, and patients make him an excellent candidate for the American Ambulance Association’s 40 Under 40 recognition.