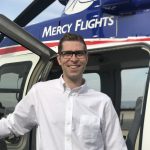 Matt Philbrick is a California native but has been living in Southern Oregon for over 11 years. Matt is a Paramedic and currently works as the Medical Operations Manager of the non-profit Mercy Flights. Matt started his career as a Paramedic over a decade ago with the desire to ‘help people in need’ and has continued that philosophy in his current position. Matt now, “takes care of the people that are taking care of our community” and finds great pleasure in helping responders have meaningful careers in Emergency Medical Services.

Matt’s career in EMS has taken him in several directions including Ski Patrol, Volunteer Firefighting, ground 9-1-1 ambulance care, and critical care flight medicine. At Mercy Flights, Matt has had the opportunity to grow as a both a clinician and a leader. In his current role, Matt helps plan organic growth for the company and also manages a dynamic operation. Currently Matt is heavily involved in Oregon State EMS committees including the State Trauma Advisory Board (STAB) and the Oregon EMS for Children’s (EMSC) committees. Matt is passionate about leadership and helping his staff maintain equanimity in both their professional and personal lives.

In his free time, Matt takes great pride in volunteering for local charities. Recently, Matt placed third in “Dancing with the Rogue Valley Stars”, a local ballroom dance competition. Matt and the other ‘Stars’ raised over $137,000 for a local charity, The Sparrow Clubs. When not at work, Matt focuses on his family. Matt is married to the love of his life Michelle, and they have two great children ages five and three. Matt and his family enjoy outdoor activities such as camping, hiking, and fishing.

Matt Philbrick is an exemplary leader and represents the future of EMS leadership for a new generation of EMS professionals. Matt’s ability to positively influence others and successfully lead a large team of professionals is a testimony to his abilities, character, insight, and skill. While Matt has a fine command of EMS operational and clinical excellence, he stands out because of his deep understanding of people, his ability to connect with employees of all ages and inspire them toward extraordinary achievement. Matt’s influence extends beyond his organization to participation, speaking, and teaching at state and national conferences.

Matt has responsibility for the day-to-day operations and clinical performance of a historic 70-year-old agency that provides 9-1-1 ground, roto-wing, and fixed-wing service. With more than 27,000 annual responses, Matt’s team of approximately 75 employees include Supervisors, EMTs, Paramedics, Nurses and Pilots. Matt’s focus is on creating a culture that employees love and building high dedication and engagement. During his time at Mercy Flights, a union was decertified and voted out by employees. Matt is currently developing a unique employee well-being program that goes beyond prevention and aids employees in making the very best of their work in EMS.

Matt’s approach to leadership begins by showing up with the best possible version of himself. Matt believes that his supervisors and staff deserve a leader who is authentic, genuine, and willing to grow. Relationships are the currency of Matt’s success, and he acknowledges that his team often knows what is best. Matt continuously seeks to listen, include, empower, inspire, and encourage. Matt clearly understands that EMS workers of the future expect organizations and leaders to create environments where respect, connection, and meaning are more than words and are nurtured in all aspects of the operation.

It is an honor to nominate Matt for this recognition. Matt represents the future of EMS and is a leader that will help the industry thrive in the coming decades.