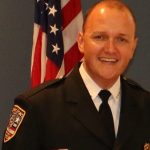 Joshua B. Holloman, MHS, NRP, CEMSO, is the Deputy Director of Johnston County Emergency Services in North Carolina. Josh is a certified paramedic, firefighter, and Emergency Medical Dispatch instructor. Josh is an advocate for increasing education, professionalism, and leadership within emergency services.

Josh obtained an associate of applied science degree in EMS from Wake Technical Community College in Raleigh, N.C. and attended Western Carolina University, obtaining a Bachelor of Science and a Master of Health Sciences degree. Holloman has served Johnston County in positions including Cadet, EMT, Paramedic, Training Officer, and Division Chief, prior to becoming Deputy Director for the Emergency Services Department.

Josh Holloman is a constant professional who deserves to be recognized as an inaugural recipient of the Mobile Healthcare 40 under 40. Josh has played a significant role in the development of the local EMS system in Johnston County, North Carolina and uses his experience and knowledge of EMS to benefit other departments and individuals throughout the state of North Carolina and beyond.

Beginning his journey as a 15-year-old cadet, Joshua started in Johnston County at a local rescue squad as a member of a junior program. Josh progressed through the ranks of EMT, Intermediate and then Paramedic. Josh served on local rescue squads during a period of transition from reliance on volunteers to dependence on full time career staff. When the county wanted to centralize EMS services and build a county EMS system, Josh was hired as the first Training Officer of the system. Josh worked with a new Medical Director and helped him better understand the field of EMS while also building the training and clinical program for the county. After serving three years as Training Officer, Josh received a promotion to Division Chief, overseeing the entire EMS system as Chief of EMS within the County Emergency Services Department. It was evident this meant a great deal to Josh, serving and building a system in the county in which he was born and raised. There was risk involved however, as Josh became the fifth person to hold this position in the last three years. Josh would go on to hold the position for seven years, leaving only to accept a promotion to Deputy Director of the Emergency Services Department.

One of Josh’s top priorities is taking care of his employees, who he believes he is there to serve. Josh has done everything from creating a dispatch center, implementing consistent uniforms standards, and increasing vehicle safety. On the clinical side, Josh has implemented many new best practices such as working cardiac arrest calls where they are found, STEMI, trauma and stroke by-pass, and treatment protocols. Josh has a great understanding of and belief in the value of the Incident Command System (ICS). Josh has taught several courses on ICS and has trained most of the personnel working EMS in the county on the principles of ICS and how they can benefit in the medical field. Josh also led the creation of policies and protocols to guide response to multiple patient incidents. Josh has created safer environment for every patient and employee.

Another great accomplishment that the system achieved with Josh at the helm is the creation of a very successful Community Paramedic Program. In 2013, Josh led the initial discussions of a program that would offer preventive care and help patients who call 911 excessively because of some unmet medical or social need. In addition, Josh helped form a strong partnership with the local hospital system by using the program to treat their high-risk patients and reduce readmission rates. Josh has delivered presentations across the country on best practices for community paramedicine programs and provides guidance to others who are starting or managing these program.

Josh uses his experiences to help others by teaching incident command, emergency medical dispatch, and leadership throughout the state and country. Josh has led local associations and groups including the Johnston County EMS Association where he assisted in creating a local scholarship fund and the Johnston County Local Emergency Planning Committee, which he chaired from 2013-2018 and helped improve emergency preparedness for local industries. In addition, Josh has presented at conferences for and is a member of the North Carolina Association of EMS Administrators (NCEMSA). Josh also is a member of the National EMS Management Association (NEMSMA), International Association of EMS Chiefs EMS Section (IAFC-EMS) and is a peer reviewer for Chief EMS Officer Candidates with the Center for Public Safety Excellence (CPSE).

Josh is a dedicated professional who believes in EMS and those providers who answer the call. Josh leads by example and stands by his word and with his people. Although Josh has already accomplished a great deal, he still has a very promising future. Josh is well deserving of recognition from The American Ambulance Association’s Mobile Healthcare 40 under 40!