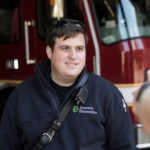 LinkedIn
Nominated by: Rob Lawrence (AAA Board of Directors)

During college, Gibson worked with a variety of EMS agencies, including fire-based, private, volunteer, and collegiate. Gibson was the founding EMS Chief of Hobart & William Smith EMS, a student run ambulance service in Geneva, New York. Gibson’s academic capstone work was on the regulatory role of the US Federal Government within modern EMS. After college, Gibson moved to Cambridge where he graduated from the Pro EMS Center for MEDICS’ paramedic program.

From 2013 until 2015 Gibson served as the Systems of Care Coordinator at the Massachusetts Department of Public Health, Office of EMS. Much of Gibson’s work was focused on identifying and implementing best practices through regulation and protocol. Gibson assisted in the implementation of a series of EMS regulatory reforms (national standards adoption) to strengthen Massachusetts’ workforce, protocols, education, and medical director involvement.

Since 2015 Gibson has held the position of Director of Special Projects at Pro EMS. In that role, Gibson worked to develop Prodigy, pursued institutional accreditation, implemented clinical demonstration projects, and functions as the Clinical Liaison and advisor to Harvard University’s program, Crimson EMS. Gibson remains actively involved in collegiate EMS at the national level and serves as an Executive Board Member for the Metropolitan Boston EMS Council.

The American Ambulance Association’s (AAA) 40 under 40 wonderfully recognizes Gibson’s already impressive achievements. Gibson is recipient of the 2019 AAA President’s Award. Gibson was honored for his service as a rising mobile healthcare leader who will help shape the future of the EMS industry. As Vice Chair of the AAA Professional Standards Committee Gibson is lending his voice on the national stage. Gibson’s work as a member of Pro EMS’s leadership team is shaping the direction of the organization and influencing the development of EMS across the North East. Simply put, Gibson is one to watch.