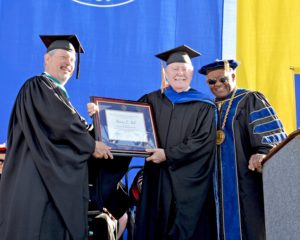 The presentation was made by CSUB President Horace Mitchell, Ph.D., who stated, “Harvey Hall’s support for CSUB and our community is upfront and unwavering.  The criteria established for awarding the honorary doctorate include distinction in the nominee’s chosen field of endeavor, widely recognized eminence, and demonstrated values consistent with those of higher education and the highest ideals of the chosen field.  Harvey Hall embodies, exemplifies, and exceeds those criteria.”

Hall is a longtime supporter of CSUB.  In 2014, President Mitchell presented then-Mayor Hall with the CSUB President’s Award for his leadership, commitment, and service to the University and the community.  In 2010, the CSUB School of Business and Public Administration Executive Advisory Council honored then-Mayor Hall with the prestigious John Brock Community Service Award for his strong record of exemplary community engagement and service.

The prestigious recognition was a cornerstone moment for Hall.  In his honorary doctorate statement, he remarked, “We all strive to make a difference in humanity but sometimes wonder about our individual contribution.  You never know what the catalyst will be that changes your life.  Mine came in 1960 in the form of a dare to go on an ambulance ride along.  From that moment forward, I made it my life’s work to respond to people in need and treat them with dignity and pride through exemplary service.”

His commitment carried on when Hall was entrusted by the people of Bakersfield to serve as their 25th mayor for 16-years—the longest in the city’s history.  Affectionately known as Mr. Bakersfield, he has been a leading advocate for quality of life, beautification, serving as a mayor for all of the people under the belief of building unity in our community.

During his tenure, Hall presented 1,836 proclamations, issued, 10,750 certificates of appreciation, welcomed new business with 958 ribbon cuttings and 91 ground breakings, delivered 981 speeches, 469 welcomes, including 452 foreign visitors.  “Nothing made me happier than to celebrate the accomplishments, celebrations, and achievements of Bakersfield’s residents,” Hall said.

His desire to be inclusive reached across borders and oceans through his work with the Bakersfield Sister City Project Corporation to establish relationships with Queretaro, Mexico; Bucheon, Republic of South Korea; and, Amritsar, India.

Hall’s commitment to Bakersfield’s youth was evidenced through the donation of his entire mayor’s salary to fund the Mayor Harvey L. Hall Scholarship Fund, which awarded $253,000 in financial aid to 297 students.

“I have devoted a lifetime to serving the people and city that I care so passionately about,” said Hall, “The conferment of this honorary degree from our state’s university system provides me clarity for a job well done.”