Written by AAA Staff on August 30, 2016. Posted in Service, Spotlight. 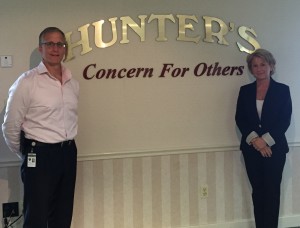 Founded in 1963 by Vern and Barbara Hunter, Hunter’s Ambulance is a leader in innovation and patient care. Hunter’s Ambulance, located in Meriden, Connecticut, provides emergency dispatch services for approximately 160 square miles and conducts about 200,000 emergency and non-emergency transports a year.

Prior to 1963, Vern Hunter owned and operated a gas station with a tow truck. When he was called to car accident scenes to tow vehicles, he often found himself helping with patients. It was through this work that Vern became interested in the emergency medical services industry, and he began Hunter’s Ambulance with his wife and their eight children. Today, Hunter’s Ambulance is still run by Vern and Barbara’s daughter, Donna Hunter.

From the beginning, Hunter’s Ambulance has adopted a philosophy that you should always “serve yourself with backup,” and therefore began actively expanding its coverage throughout the community. Throughout the 1970s and 1980s, Hunter’s made several acquisitions, beginning with the purchase of a service on the other side of town. Today, Hunter’s operates five transportation divisions. Its main headquarters is in Meriden and houses the administration offices, the vehicle maintenance station for all vehicles, and the training facilities for both employee training courses as well as community education. Hunter’s also has satellite locations in East Meriden, Middletown, Wallingford and Old Saybrook.

Unlike many other ambulance services, Hunter’s Ambulance is a full service provider, offering both emergency and non-emergency transport. In addition to emergency 911 dispatch, Hunter’s manages a chair car and livery service and a limousine service. It has also operated a school bus for children with special needs since 1995, and is proud to teach emergency preparedness to nursing homes; a skill they have acquired through performing four successful nursing home evacuations. 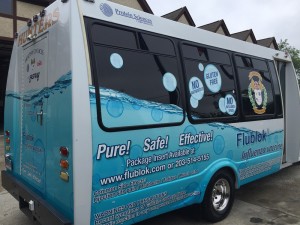 vaccinations to the community. Hunter’s took one of its transportation vehicles and developed the Flublok bus, a vehicle designed to travel the community as a mobile clinic, providing flu shots to those who may be unable to travel for one. Last year was the Flublok’s first year, and it administered 2,200 shots. The program won an Innovation Award with the Connecticut Chamber of Commerce.

Though Flublok has been a current success for Hunter’s Ambulance, innovative ideas designed to better serve the community are not a new concept for the service. In the 1990s, Hunter’s developed WebSafeKids, a program designed to help kids begin using computers to learn about safety. The program was implemented in local schools, and was awarded an American Ambulance Association AMBY Award in 1997.

Over the last 50 years, Hunter’s Ambulance has grown and developed into the industry-leader it is today through progressive management and a family-oriented atmosphere. In 2010, with the intention of maintaining its family-grown roots, Hunter’s made the decision to transition to an Employee Stock Ownership Company, becoming only the second service in the country to do so. As a result of empowering its employees with a greater financial interest, Hunter’s sees excellent retention rates and has recently celebrated 85 employees with 10-35 years of service.

Hunter’s Ambulance has been an AAA member since the beginning, and Donna and her siblings grew up attending AAA conferences with their parents. Both Donna and David Lowell, Hunter’s Executive Vice President and Chief Operating Officer, cite AAA’s remarkable federal advocacy on behalf of ambulance services nationwide as a prime reason for Hunter’s continued membership. The ability to reach out to key industry legal experts through AAA membership has also tremendously helped Hunter’s over the years. Hunter’s Ambulance is a proud supporter of the AAA Stars of Life event, and has sent at least one Star every year.